A micron is a unit of measure in the metric system equal to 1 millionth of a meter in length (about 39 millionths of an inch). The average cross-section of a human hair is 50 microns. The human eye cannot see anything smaller than 40 microns in size. 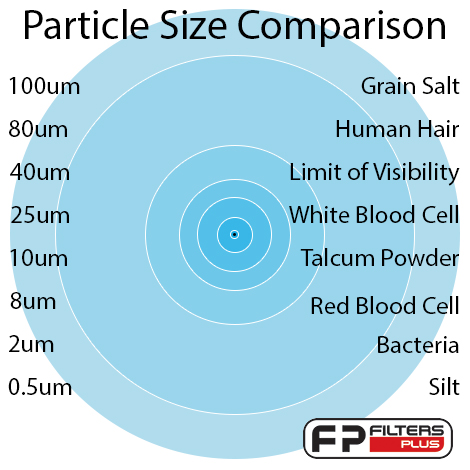 A micron rating is used to indicate the ability of a liquid filter to remove contaminants by the size of the particles. It is important to remember that a micron rating without an associated beta ratio or efficiency does not fully describe the performance of a filter.

A filter that has a rating of “10 microns” has some ability to capture particles as small as 10 microns; however, because there is no single accepted way to measure and describe the size and amount of contaminants a filter can hold, you need more information. For a micron rating to be truly useful, you must know the filters’ removal efficiency of the specific particle size in question. There are several variations of micron ratings, but the two most common terms used are nominal and absolute.

Nominal Micron Rating – expresses the ability of the filter to
capture particles of a specified size at an efficiency between
50% and 90%. For instance, a nominal rating of 50% at
10 micron simply means that filter captures 50% of
contaminants 10 microns in size. Keep in mind that nominal
micron ratings may range anywhere from 50 – 98.6% efficient at
removing a specific particle size.

Absolute Micron Rating – means that the filter is capable of
removing at least 98.7% of a specific size particle. This rating is
determined by a single-pass or multi-pass test in which
fluid containing measurable particles is passed through a flat
sheet of filter material. Particles that pass through are
measured and counted. This rating is more informative than the
nominal micron rating.

When you call the Baldwin Catalog Hotline with a question about a filter’s micron rating, you will be given both the nominal and the absolute micron ratings. Typically the nominal rating is a 50% efficiency rating. However, this should be verified if not given to you.

If you are ever provided a micron rating by another filter manufacturer, it is important to ask if it is the nominal or absolute rating, as well as the percent of efficiency rating and contaminant capacity. This will allow you to better assess the performance of the filters being compared.