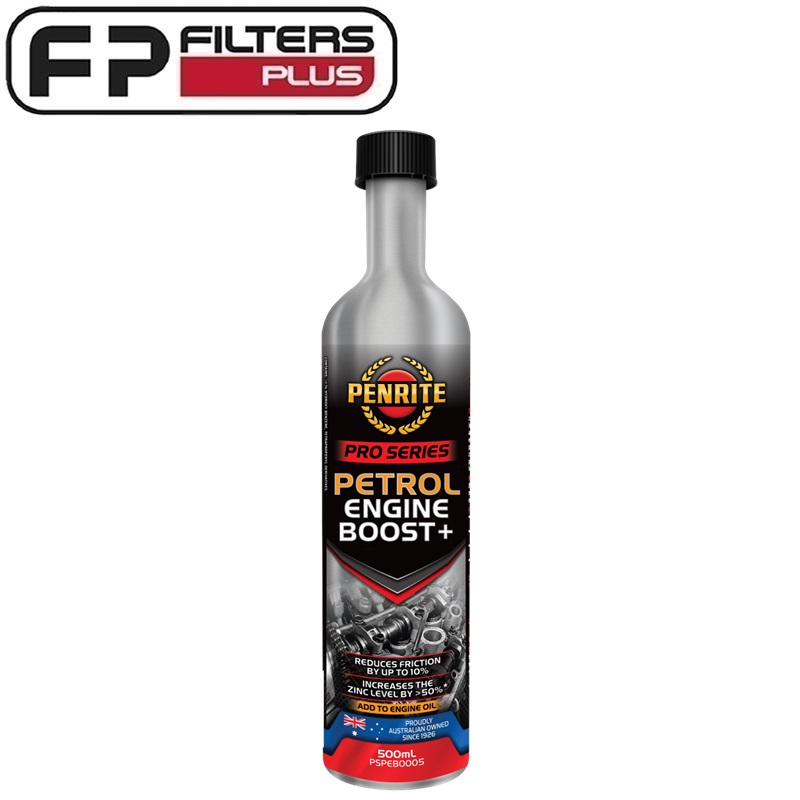 PETROL ENGINE BOOST + is a professional oil booster additive that reduces friction and improves anti-wear performance of engine oils. Its advanced technology also helps to maintain the engine oils specifications for fuel economy, performance and longevity. It effectively lifts the zinc levels of the engine oil without increasing the phosphorus levels allowing it to be used in conjunction with Mid and Low SAPS engine oils used in modern low emission engines.

MSDS can be found here

Check out the full range of Penrite Additives here

PETROL ENGINE BOOST + is designed for use in modern and classic 4, 6 & 8+ cylinder, multi cam, multi-valve including VVT, naturally aspirated, supercharged & turbocharged engines. It can be used in high performance and standard engines as well as in competition and normal on/off road use. It is not suitable for use 2 Stroke engines.

PETROL ENGINE BOOST + is ideal for use with full synthetic, semi synthetic or mineral based high performance engine oils. It is very suitable for use in low and mid SAPS, fuel economy petrol engine oils for modern low emission engines. Its advanced formula will not harm exhaust catalysts

One 500ml bottle adds the following approximate PPM from the booster pack to the engine oil.

One 500ml bottle in a 6L sump is sufficient to take a typical mid SAPs petrol engine oil to a zinc level of about 1510ppm, without increasing the levels of Phosphorus, Sulphated Ash or Sulphur.

PETROL ENGINE BOOST + has been proven in race and competition conditions in engines requiring a high performance engine oils. It is the product of choice for many competitors running competition vehicles in circuit & drag racing, rallying, drifting, hill climb, targa, time trials and regularity.

PETROL ENGINE BOOST + is suitable for use in competition applications and on road in passenger car and light commercial vehicles and can be used with vehicles running on Petrol, LPG, E10, E85 (Competition Only), avgas, methanol, nitro, methanol & other fuels. It is not suitable for use in diesel engines or in four stroke motorcycles with wet clutches as the friction modifier will impact clutch performance.

Penrite has been one of Australia’s leading oil manufacturers and has been proudly Australian Owned and Run since 1926. Offering a massive range of oil, additives and other products to suit all industries, Penrite is simply ‘A Better Class of Oil’. Filters Plus WA Stocks a large range of Penrite products ready for dispatch from our Perth warehouse.