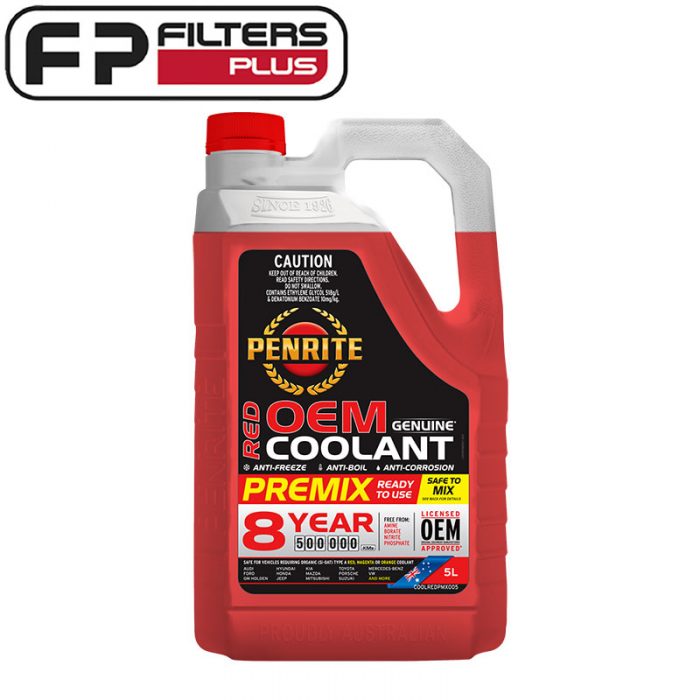 Check out our full range of coolants here

Red OEM Coolant Premix provides extended long-term protection against rust and corrosion for all materials used in the engine and in the cooling system construction. It protects cast iron, aluminium, copper and solder alloys as well as the hoses, seals and plastics. It is especially effective in all aluminium engines that are under load or used in extreme hot and cold climates. It may be used in all types of vehicles that use red, magenta or orange coloured initial fill coolants and it is also suitable for use in out of warranty service to maintain OEM performance. It is also ideal for motorcycles.

Red OEM Coolant Premix is a 50% concentration formulation and is ready to use directly from the container. It is pre-mixed with Penrite De-Mineralised Water and can be poured directly into the cooling system. No further dilution is required. It can be used as a complete service refill, top-up or is safe to mix with compatible Type A coolant. Penrite recommends that a 50% concentration level should be maintained for maximum, performance and longevity of the coolant and protection of the cooling system.

Penrite has been one of Australia’s leading oil manufacturers and has been proudly Australian Owned and Run since 1926. Offering a massive range of oil, additives and other products to suit all industries, Penrite is simply ‘A Better Class of Oil’. Filters Plus WA Stocks a large range of Penrite products ready for dispatch from our Perth warehouse.